Home / Art and Creatives / Drawing / He built his Stature in Caricature 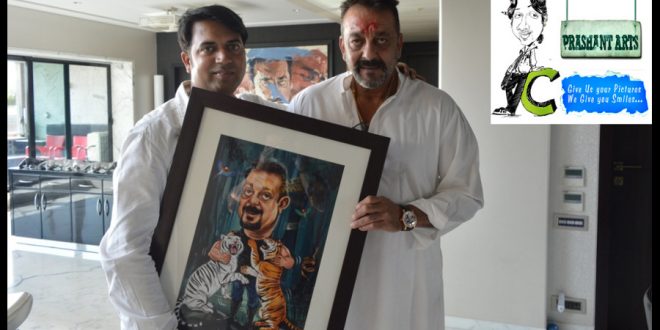 He built his Stature in Caricature

Caricatures have our childhood associations with humour, happiness and fun. It is also an art form about exhibiting a person in a form that can make him identify a different personality in him. The images, and your messages, will stay with them much longer than they might otherwise, simply because you have tapped into the human desire to listen to narratives and to laugh. With the motto, “Give us your pictures, we give you smiles”, Pune based master caricature artist Prashant Sinha has given everlasting memories to over 5 lakh people since he started his venture Prashant Arts in 2006. With a team of creative artists, Prashant receives domestic as well as international orders and his work has won him numerous followers.

Born in Allahabad, Prashant pursued art as a serious hobby in his childhood. He graduated (BFA) in Applied Arts from the College of Arts and Crafts in Lucknow and completed his Masters in Visual Arts (MVA) in Illustration from the prestigious Fine Arts Faculty of MS University, Vadodara. While he was doing his masters, he had put up a solo exhibition of his paintings along with few caricatures and cartoons in Vadodara. While his paintings were appreciated by everyone, his caricatures and cartoons drew huge complements from the audience. It was then he realized that caricature art has a great potential if opted as a mainstream work of art for future. However, he was not ready yet to take the plunge into this field.

After completing his masters in 2004, Prashant started working as an illustrator in an animation studio in Mumbai. But after an year or so, he left the job as it was not giving him the satisfaction and recognition for the efforts he was putting in it. He moved to his brother’s place in Pune and started hunting for a job. After couple of months, he joined as an in-house artist in Malaka Spice, one of the premium restaurants in Pune. And that turned out to be the turning point in his career. He met lots of fun loving people, he was appreciated for his caricatures, he started getting orders for work and his network grew. Time flew by and he decided to start his venture Prashant Arts in 2006.

While I was working as an in-house artist in 17 table restaurant, some guests, at times, used to ridicule me and my services saying what are you doing here after passing out from such a premier institute. My art was ignored by many and they doubted about my future. But my parents and brothers always supported me in my ups and downs.
Prashant Sinha

Prashant and his team can make live caricatures of you and your loved ones, or can make a caricature from a picture. They can create special-themed caricature art for special occasions like weddings, birthdays and personal and corporate parties and can create unique, personalised gifts for your dear ones. They have also done illustrations for magazines, advertising agencies, brochures and have gifted their caricature art to many celebrities. At Prashant Arts, the team has not limited themselves only to caricatures, they also undertake requests for customized paintings, murals and portraits from all across India and outside India as well.

The experience so far has been amazing and a bit shocking as well since in-spite of being most underestimated art, people have given us great response. We get many ideas for caricatures from our patrons now who share their creativity with us.
Prashant Sinha