Home / Art and Creatives / Painting / She quit teaching engineering to become artist, is more alive doing painting than anything else

She quit teaching engineering to become artist, is more alive doing painting than anything else

She can see her finished painting before she starts the first stroke. Being self-taught gives her no boundaries on what is right or wrong. Infact, she thinks there isn’t any right or wrong in art. Using her personal experiences and surroundings as inspirations and with her strong creative instincts, she paints for the challenge and sheer joy of being able to express herself in a visual form. A young Engineering Professor who left her career to follow her passion, she challenged the stereotypical mind-set of her peers by organizing her own exhibitions to establish herself in the industry. Meet Pune based Tejashree Khanvilkar, founder of Tejashree Creations, a well known artist and a respected art teacher, who takes her students on a tour of self realization to find the artist in themselves.

Tejashree liked drawing and painting right from her childhood. While initially it was a hobby, she slowly got hooked on to it. She was inspired by the artworks of her great grandfather who had his own art studio in Baroda, Gujarat and was one of the finest portrait artists in his generation. She received many medals and trophies in various national level art competitions. However, much against her own liking, she had to honour her parents’ wishes and pursue a career in Engineering. After completing her graduation in 2011 and masters in 2013, she worked as an assistant professor in an engineering college. During these years, she would go back to her canvas whenever she got some free time. The creation process was relieving for her, allowing her emotions to spill out onto her canvas.

Between 2014 – 15, I got so busy in my job that I wasn’t able to devote time for art as much as I liked to. I felt stressed out because of this internal battle and it started impacting my health.
Tejashree Khanvilkar

Tejashree experimented with various artforms and started exhibiting her artwork on her own after her graduation. She received critical acclaim and appreciation for her work. Her parents also realized that this was the area of her calling that gave her immense happiness and confidence. After fulfilling her parents’ wishes, she decided to pursue her own aspirations. She quit her job in 2016 and started working full time for her own firm and art institute, Tejashree Creations. Here, she guides all the upcoming self-taught artists and conducts workshops on painting and various creative subjects. She also organizes exhibitions of her artwork and of her students regularly. She believes in giving back to the society and donates all the proceedings of her artwork from the exhibitions to old age home and orphanages run by city based NGO Maher.

Initially, without even seeing my paintings, I was denied entry for showcasing my work in exhibitions. The reason told to me was that I am an engineer so won’t have an artistic mindset. That’s when I decided to organize my own exhibitions. The same people now reserve an entry for me in their exhibitions. However, I still prefer going solo.
Tejashree Khanvilkar

She also undertakes assignments for customized handmade paintings and designing innovative interiors for clients as per the requirement. She prefers coaching only those in her workshops and classes who are serious about art so that she can give personal attention to them. Just like her engineering career days, she believes there are many in our society with artistic talent who are unable to pursue art for various reasons. She aspires to start her own full-fledged Art School in coming years for the self-taught artists who have the passion to learn and visualize their thoughts and put it on canvas. She intends to provide a curated platform for such artists to showcase and promote their work.

♦ Self-taught artist, quit job as Engineering Professor in Jan’16 to start Tejashree Creations
♦ Painting Workshops started from Oct’16 – 400+ students trained so far
♦ Organized 4 exhibitions on her own between 2012 to 2016 showcasing her work and that of her students, the proceeds for her work go to charity
♦ 5th Exhibition scheduled from Sept 22 – 24, 2017.
♦ Successful as a commercial artist – several of her paintings sold to art connoisseurs, undertakes made-to-order assignments

I worship my work. I am probably more alive, more happy, when I am painting than doing anything else.
Tejashree Khanvilkar

Tejashree is coming up with her 5th exhibition at Balgandharva Art gallery, J M Road, Pune from September 22 to 24, where she will showcase primarily the artwork of her students and some of her latest creations. 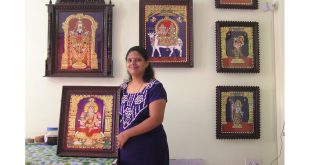 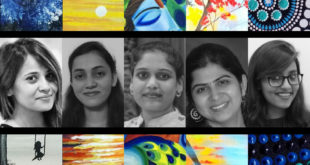 Pursuing passion, discovering the artist within 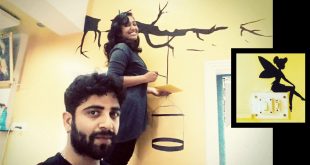