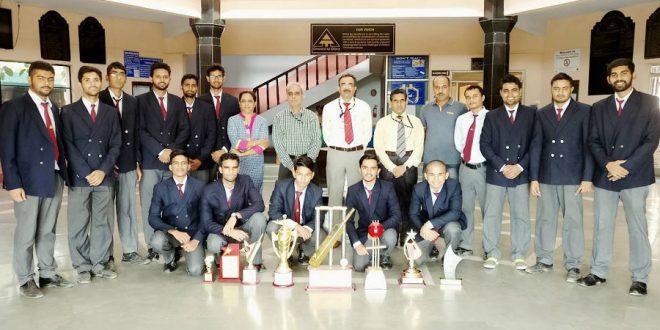 The 2016-17 season was truly one of the best for AIT Cricket Team as they were invincible throughout the tournaments they participated in, playing 32 matches and winning them all! It is a record of sorts in AIT. Winners of five major inter-collegiate tournaments of Pune – MIT Summit’16 of MIT, Cricket Districts 2016-17, Zest’17 of CoEP, PACE’17 of AIT and Kalyan Karandak’17 of Trinity College, this team has made their institution proud with their sheer dedication and passion for Cricket. Team Buzzingg interacted with Praveen Kumar, the Sports Secretary of AIT and a member of this team of shining stars, to celebrate their success.

Not only cricket, but overall, it has been a fantastic year for AIT Sports. We participated in 17 Inter-Collegiate events and were among top three positions in 13 of them! That speaks volumes of the support from our college for Sports.
Praveen Kumar, AIT Sports Secretary and Member of Cricket team

A team may win one odd tournament with their efforts and a bit of luck but to consistently win these many games and tournaments, they ought to be extraordinary. So are these boys! All these wins were not as smooth as one might think of, neither they were bereft of challenges. Engineering studies loaded with assignments, mock tests, internals, classes, hard-to-meet timelines, et al pose a big question mark to students when one thinks about participating in extracurricular activities. But with their self-driven attitude and the belief that they can come back from all odds, these AIT cricket stars never backed out from the challenges they faced and brought laurels for their institution.

The support from our College administration in sponsoring us and providing us with transport facility for each match helped us immensely to play tournaments at locations far away from our campus. Major plus was that we were able to concentrate on just our cricket and didn’t have to bother about the rest.
Praveen Kumar, AIT Sports Secretary and Member of Cricket team

Strategy
Throughout the season, the team stuck to four golden strategies. Strategy 1 – 10 days prior to any tournament, they’ll take out 2 hrs everyday in the evening after classes for the practice sessions. Given the knockout nature of the tournaments, they targeted to be fully ready before they walk on the field for the first match. Strategy 2 – They invested a lot in building their bench strength to meet any eventuality – this strategy turned out to be match winner for them during the season. Strategy 3 – The final team selection was done on Merit and Merit alone. In every match, they aimed that each one of the eleven players was a match winner in himself! Strategy 4 – The team used to have planning and strategy meetings on the eve of every match. These were interactive meetings where every member of the team had a say. They never went to a match without a game plan in place.

The team would also like to give credits to our BEs [Pankaj Kumar (Captain), Kartik Chauhan (Vice Captain), Vikram Mishra, Ashish Singh, Deepak Kaler and Ashutosh Mishra] not only for performing so well but also for mentoring us on and off the field.
Praveen Kumar, AIT Sports Secretary and Member of Cricket team

Challenges
During their first tournament – MIT Summit’16, AIT was also having Aakriti’16 (inter branch event). It was a bit difficult for them to focus on both the events at the same time, but they always gave more priority to representing their college than their branch. During the time of Cricket Districts’ 16-17, they were having holidays and some of their players were unavailable, but their solid bench strength won them the matches. CoEP Zest’17 was held in January just before their exams. The team members juggled between studies and practice sessions during the gap between two matches. AIT Pace’17 was the toughest of the lot considering the pressure of being the host team. None of their matches was single sided and winning all those close encounters displayed the character of the team in performing well in crunch situations. During Kalyan Karandak’17 of trinity college, they had to manage their submissions and matches at the same time. It was the last tournament for the senior members of their team (final year, BE) and they wanted to win this for them and give them a fitting farewell.

To be successful in a team game, you got to have great team bonding. We all enjoyed each other’s success and were there to help during failures. That is what you want from a team. Infact, Ours is beyond a team, it is a family – AIT CRICKET FAMILY!
Praveen Kumar, AIT Sports Secretary and Member of Cricket team

Fresh with new talent, the team only wants to move forward from this position in the coming season. They want to continue the legacy and win more tournaments and keep AIT at the top wherever they go. With a new cricket practice pitch coming up in their college premises, the standards of AIT Cricket will only rise from here! 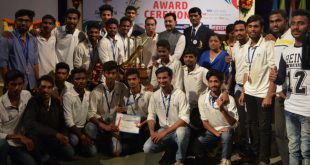 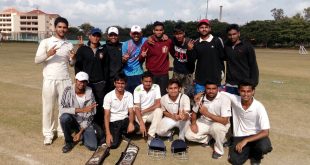