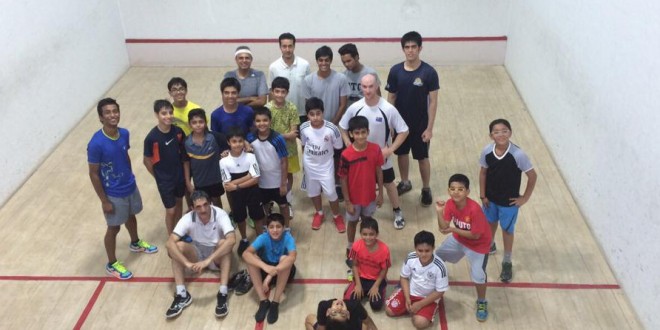 Rolling Nicks Squash Academy (RNSA) was started in 2009 by ace squash player of Pune – Abhinav Sinha. It provides all of the necessary elements of long-term athlete development including top coaching, dedicated court time, world-class fitness and training facilities and therapy or rehab services. It aims to develop squash awareness and provide better facility to learn and play squash in Pune.

Abhinav’s elder brother Ambuj Sinha, with the help of Mr. Dalip Tripathi (renowned coach), introduced him to squash at the age of 9. He also got good support from his headmaster Mr. Kabir Mustafi while he was studying in Bishop Cotton School, Shimla. Subsequently, he moved to Pune. However, during his stint as a junior squash player, he struggled to get good squash facility to train and very less international exposure. To overcome this hurdle for the squash aspirants in Pune, he launched Rolling Nicks while he was in second year of his law studies. At 19, Abhinav was the youngest squash player to open his own academy to promote squash. However, he did not compromise on his studies and completed his graduation from ILS, Pune, one of the most reputed colleges for pursuing law as a career.

After graduation, Abhinav realized that squash is his calling and took the tough decision to pursue a career in squash over law. His parents, Ms. Mamta Sinha and Late Mr. Anuj K Sinha, always supported him to pursue career of his choice. With the support of his family and friends, he overcame challenges that came along the way. And there was no looking back. He has played at college, university, clubs, state and national level tournaments and has played World Juniors and Asian Juniors as well. He is currently playing the International Pro Tour PSA.

Team RNSA has been managing regular activities in various clubs, schools, hotels and societies. They have launched The Westin, Pune squash court and have done a clinic for them. They have also started well structured Squash training programs for various clubs in pune like Poona Club and Bramha Suncity. They have promoted the sport in schools like Indus International School. They have also done clinics for corporate like TCS at their Hinjewadi facility. RNSA has been doing clinics for Indian army team as well as coaching in NDA and CME.

By taking the sport into schools, clubs, society, etc, it gives huge exposure to the game. It also allows the RNSA team to scout for fresh talent that one day hopefully will represent India at the Olympics. Abhinav Sinha

Abhinav has gone beyond pune now and he is heading the coaching program at one of the biggest squash clubs in India – Otters Club, Mumbai. RNSA has grown rapidly over these years and now has their first branch in Shivaji nagar with one court with the help of Mr. Yogesh Thube. They are in the process of expanding soon. The pune team of RNSA includes Sairaj Marawar who is coach and runs the regular activity at their Shivaji nagar branch. The event management is handled by Rohan Agarwal (Manager) and Chirag Khemani (Manager).