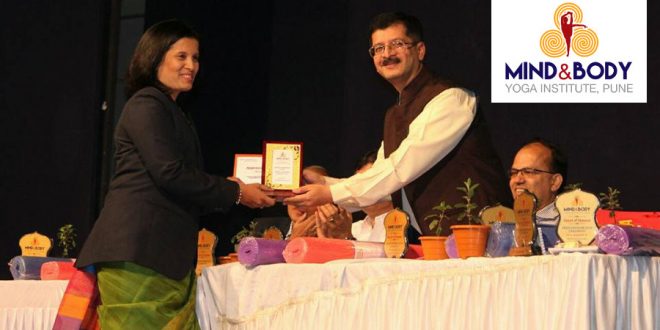 Yoga has been an intrinsic part of the Indian culture since thousands of years. However, very often, yoga’s benefits are only perceived to be at the body level and we fail to realize the immense benefits yoga offers in uniting the body and mind. Meet Manali Amod Deo (Gharpure), former Coach of India Women Team for Yoga and Co-founder of Pune based Mind and Body Yoga institute, who has organised numerous camps, seminars and training programs in last 15 years to grow awareness on Yoga. She has trained over 7000 yoga practitioners and has groomed over 80 students to become National level yoga players and 37 of them have competed in International Yoga Competitions and brought laurels for our country.

Manali was introduced to the world of Yoga by her parents at a very young age when she was studying in Grade 2. She was a national player of Yogasana Rope Mallkhamb and International yoga player silver medalist. After a PG in Commerce, she decided to pursue a career in Yoga as a full-time instructor. She started teaching at Jnana Prabodhini Kreedakul, Nigadi in 2002 where she trained many players who won national and international championships. Post marriage, her better-half Amod Deo has also supported her in pursuing her dreams and together they founded Mind and Body Yoga Institute in Jan, 2009.

At Mind and Body Yoga Institute, Manali organises a range of training programs like Toddler Yoga, Power Yoga, Artistic Yoga, Fitness Yoga, Medical Yoga for adults, Aerobics and Competitive Yoga along with yoga certification courses. She is the first Yoga teacher in Pune to have started training young children in the art of Yoga Belle / Artistic Yoga, a form of yoga where groups perform a routine to display complicated and rhythmic yoga postures choreographed with a musical background score. Her performances in group artistic yoga have been immensely popular. She also teaches “Deep Yoga”, a form of yoga in which the participant holds wax lamps on her hands or on her forehead while performing yoga postures. This practice helps concentration skills & calmness of mind.

Manali has organized many district and state level competitions for Yoga and has written regularly for several publications like Sakal newspaper and various Martial Art Magazines. She has written books on yoga as well – Keep Fit (2012) and Yoga for Kiddos (2017). She also works as deputy treasurer of Pune Zilla Yog Sanstha. She believes that Yoga is a practical science of fitness for the modern man, woman & children. Office workers sit for hours at a stretch inviting back problems, homemakers need proper restoration from their duties, and children require physical regiments that are fun while disciplining the body for their growth. According to her, the practice of Yoga re-establishes connection between Body & Mind. It helps in connecting person’s conscious and intuitive mind. Live and Love Yoga should be our fitness Mantra.