Anurag Gupta, Malati Gupta and their daughters were recently awarded as the Best Running Family for 2016 by Mumbai Road Runners, a non-profit group of passionate runners whose aim is to promote running in Mumbai. The Guptas had participated in 25 events pan India, clocking 66 race finishes during the course of last year. A regular at the marathon circuit, Anurag’s journey in this field started in 2009 when he decided to transform his lifestyle after being diabetic and obese for 6 long years. It is said that one run can change your day, many runs can change your life. The Gupta family swears by it.

Anurag first came to realize that he was diabetic in the year 2003. It came as a rude shock to him as his sugar was as high as 387. In fact, he realized it accidentally as a wound on his leg was not healing and when he went to doctor, he was told to get checked for sugar. Over next couple of years, he consulted many doctors hoping for a cure but without any luck. In the interim, his rapid climb up the corporate ladder entailed hectic lifestyle including long working hours and travelling of close to 240 days in a year, which put further stress on his already fragile health condition. His health took a real beating and he started putting on weight, touching an all time high of 100 kg against his normal weight of 78 kg. What further complicated issues was that this led to Asthma and resultant breathing problems. It became so serious that, in 2009, he had to be rushed to hospital virtually every alternate day. At one point, Anurag felt that his end was near if he did not do something radical about his situation. That’s when he started to completely change his lifestyle and took a call to pursue running as a sport in 2009.

In pursuit of this goal, Anurag started by building stamina which entailed walking for 2-3 hours in one go for a couple of months post which he started running. His first run was a mere 400 meters but he persevered. One good thing that helped him a lot was that his wife, Malati, was along with him throughout this journey encouraging and motivating him. They did their first run, 10k at I-race IIT Mumbai in 2009, followed by half marathons at Airtel Delhi half marathon and SCMM half marathon, which he ran in 2 hours 12 minutes in his maiden attempt. Post that Anurag and Malati have been a regular at running circuits across India. In due course, they inducted both their daughters, Rhea and Tanya also into the field of running. Despite their studies related commitments, the sister duo participated in a total of 22 runs last year.

Now, My diabetes and Asthma is absolutely under control without medication for last 2 years, courtesy running and a disciplined life style. My weight has dropped down to 75 kg mark, a full 25 kg below peak levels in 2009. I am definitely much more fitter and energetic than I was say 15 years back.
Anurag Gupta

The Guptas maintain a very strict exercise and running regimen to prepare their bodies for the amount of races they participate in. Anurag, for instance, runs around 3000-3500 km every year. Considering the corporate life he leads, it entails tough discipline of getting up very early on week days (latest by 5-5.30 am) to squeeze in a 10-15 km run on a week day for 2-3 days of week. Other week days are spent in gym towards strengthening various body parts with sessions dedicated to doing legs, upper body and core strengthening. Their weekends are normally about doing real long family runs when they are not doing competitive running. This gives them good time to bond together as a family.

The journey has been great so far. Running teaches me that I am capable of so much more than I imagined. I want to run comrades – 89 km run at South Africa within next 3 years.

Anurag is an Engineer, MBA by qualification. During his professional career, he has handled senior leadership positions with Aptech Limited and NIIT Limited before handling CEO position at Frankfinn Institute of Airhostess Training and Balaji Telefilms Limited. At present he is a partner with Private Equity fund named Indus Balaji that has Balaji Telefilms as its principal sponsor and is on Board of Directors of multiple organizations.

Mumbai Road Runners is a pan Mumbai Running Group not affiliated to any running coach or program. It is a purely not for profit venture. As a running group, they organize group runs, events, Runners Awards, Runners Bash, non running physical activities like Yoga, beach football, Rock climbing etc. They are the first ones in India to start the concept of Running awards. 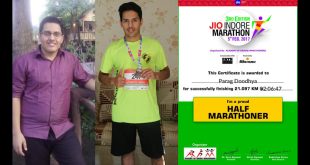