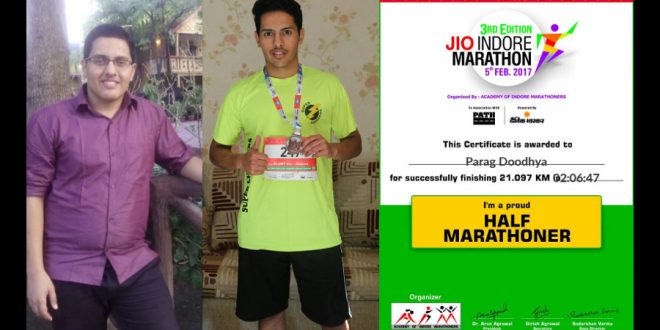 Parag Doodhya, from Indore, was 15 years old when he was diagnosed with a kidney disease, Nephrotic Syndrome – a condition wherein large amounts of protein leaks out from blood. He was put up on medicines including steroids for multiple years. By 2015, while the disease was brought under control, Parag had gained lot of weight as a side effect of the steroids. He experienced increased risk of infections, thinning bones, slower wound healing and had acne all over his body. Fast forward couple of years and today, Parag is a transformed 19 year old superfit and confident engineering student who is a regular in Indore marathons. We bring you his fitness success story.

From the medical journals – In Nephrotic syndrome, the filters in the kidneys become ‘leaky’ and protein (mainly albumin), instead of remaining in the blood, leaks out into the urine. The symptoms include oedema or swelling of body tissues, tiredness, lethargy and a poor appetite. The complications due to loss of protein include anaemia, high cholesterol level and increased risk of developing infections, blood clots and vitamin D deficiency.

Parag’s treatment continued from 2012 to 2015 during which period he was prescribed cortico steroids by his nephrologist. Nothing changed much until 2014 and that disease even relapsed thrice. By January 2015, his health got better with each passing day and he was relieved from steroids in 2015. However, until then, he had gained a lot of weight as a side effect of those steroids and also because of sedentary lifestyle. Other side effects included increased risk of infections, thinning bones, slower wound healing and pimples – acne all over his body. It was the time when he was advised to reduce weight. He started putting efforts but due to some or the other reason he couldn’t get going. His first attempt, Failed!

Parag then got busy with his 12th grade examinations and did nothing much. Once he was done with exams in April 2015, he decided again to shed those extra kilos. He recollects he didn’t put enough efforts and soon gave up. His second attempt, Failed! In July 2015, he again thought of getting into fit lifestyle and so started with walking. At that time he wasn’t even able to run 400m but as days went by, he improved and within 10-15 days he was doing much better. However, tragedy struck again when in the excitement of achieving his unrealistic goals, he injured himself. It was a muscle stress fracture on his left leg and he was advised to take rest for 3 weeks. It was a big disappointment for him as he lost all hopes of any weight loss. He weighed over 80 kgs around this time. He kind of gave up and accepted himself as a failure. His third attempt, Failed!

After a month, around August 2015, Parag’s injury healed completely and he got admitted into an Engineering college. Learning from his past failures, he made up his mind to leave no stone unturned this time in pursuing his fitness goals. He started off well and followed a very strict diet and results showed up in the first month itself. Again there were few injuries, thankfully minor ones and few other setbacks but there was no looking back. There were times when he felt low in energy and lot of pain but there was something that kept him pushing harder and harder. He continued to follow a very strict diet, cardio workout and strength training schedule. Months went by and its been over a year and half of following a strict fitness regime, he has lost more than 20kg, has completed multiple half-marathons and his kidney disease got completely cured as well.

Facing so many failures, I learnt a lot and specially what I personally feel is that running marathons teaches you how you are supposed to live life. I feel more confident. I am now comfortable in my own skin – that’s the best part! 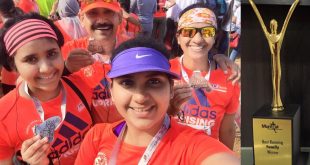