Pune Mobile Developers is the one of the biggest and most active meetup group in pune for knowledge exchange on mobile technologies. With 2800+ members, the group is actively involved in organizing sessions which cover various areas of mobile development in different platforms including Android and iOS.

Ashutosh Tripathi, Suyash Gupta, Kaushal Dhruw, Tarun Sharma and Arvind Morya are the core team members of this group. Events are hosted in the premises of Talentica Software which is also the sponsor for this group.

Recently, they organized a meetup on 14th May focused on Android best practices as part of their monthly meetups. Primary motive of the event was to address dilemma faced by most android developers in the design phase when they need to pick right design architecture for project.

This session was presented by Suyash Gupta, Senior Android Developer, Talentica Software. He focused on the benefits of MVP and MVVM patterns along with insight on Dagger and RxJava which are used to achieve a scalable and maintainable app.

The session was very well received by the attendees and they appreciated the efforts of the presenter and the organizing team.

The session helped in providing a better understanding of the practices & architecture to be followed building mobile apps which are modular and easily maintainable. Zoheb (Attendee)

I was surprised with the attendee’s strength. The session went really well, there was an interesting discussion on the design patterns and object-oriented principles. They not only appreciated the learning they had but they were also interested in the similar session in future. I am thankful for my organization for letting me present this session.  Suyash Gupta

Given the fabulous response received for this workshop, the group is already gearing up for a bigger turnout for their June Meetup where they intend to Unravel Android N. 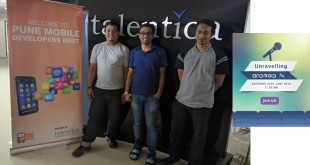